What is the GPS matrix?


Users of GPS (Geometrical Product Specification) standards are aware of the GPS matrix which is a convenient way of classifying standards in the various chain links of the specification-verification chain. But are you sure to know how to use it?

A matrix to rule them all

The lines of the matrix correspond to categories of characteristics used in dimensional metrology as well as in surface metrology. Each standard developed by ISO TC213 contains an annex with the GPS matrix stating which chain links are concerned by the document. 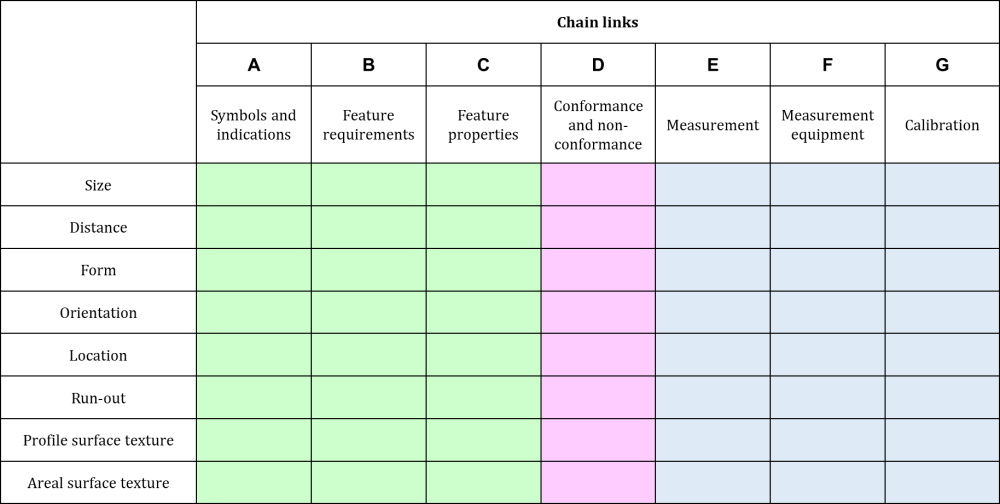 Surface texture standards cover the last two lines. Some old standards sometimes belong to more than one column. In principle, modern standards should be limited to a single column, covering possibly several lines.

Column D mainly contains the ISO 14253-x series on decision rules for verifying conformity. This series is quite global and can be applied equally on dimensional or surface texture.

An interesting example is ISO 12085, the old motifs method, which covers several links of the GPS matrix. It defines the R&W parameters (column B) and the segmentation and its limits (column C) and gives recommendations on how to measure the profiles and how to choose spacing (column F). This standard today would be split into several parts, each covering a single column of the GPS matrix.

There are also other useful matrices in GPS standards. For example, the Filtration matrix from ISO 16610 (see Table 2). As new standards are in preparation within this series, the matrix will likely be extended, with new columns (50 and 90) and also, in the future, it will host a new type of element with the triangle mesh data. But that is for later...

The areal standard ISO 25178, also has its own matrix, with many documents relating to instruments and calibration (parts 6xx, 7x, 7xx...).