The most common instrument for measuring surface texture is the stylus profilometer. Compatible with a use in a production workshop and in a metrology lab, its simple and comprehensive principles makes it easy to use for any user.

During the Second World War, the war effort required mass production of vehicles, aircraft and weapons, often by converting companies from other sectors of activity. In order to ensure conformity and manufacturing quality, it has become necessary to check not only the dimensional tolerancing, but also to control and check surface texture of manufactured parts. However, the scale at which surface texture appears, does not allow reliable visual inspection, in most cases. It was therefore necessary to invent new measuring instruments.

It was particularly under the impetus of Rolls Royce, which needed it for their factories, that the quest to manufacture the first commercial profilometer was launched, in the late 1930s. Engineers and researchers have contributed to the work, such as Dr Schmaltz, Ernest J. Abbott, Harry Shaw, George Tomlinson and above all John E. Reason from Taylor Hobson. John Reason designed and developed the first commercial and autonomous profilometer, under the direction of Mark Taylor.

Its simple and effective design is based on the movement of a probe, guided by a reference surface. A stylus records the height differences on the surface to be measured.

Principles of a profilometer

The principle of a profilometer is quite simple. A microscopic tip, in contact with the surface, is moved along the X axis. The vertical movement of the tip, due to the surface relief, is captured and amplified. The profilometer is generally installed on a Z column, allowing the stylus to be positioned above a part to be measured. The traverse unit moves the stylus along the X axis, perpendicular to the Z axis. The granite base serves as a reference plane, and as a support for the parts to be measured.

More precisely, the sensor slides on a reference bar, thanks to a drive screw, driven by a motor. The bar serves as an internal straightness reference. It is an expensive element, ground with great precision, which often justifies the price of the profilometer. It allows the stylus to record the entire surface texture, be it roughness, waviness, form deviations, or even the form itself.

There are also profilometers without internal reference, whose stylus is equipped with a skid resting on the surface. 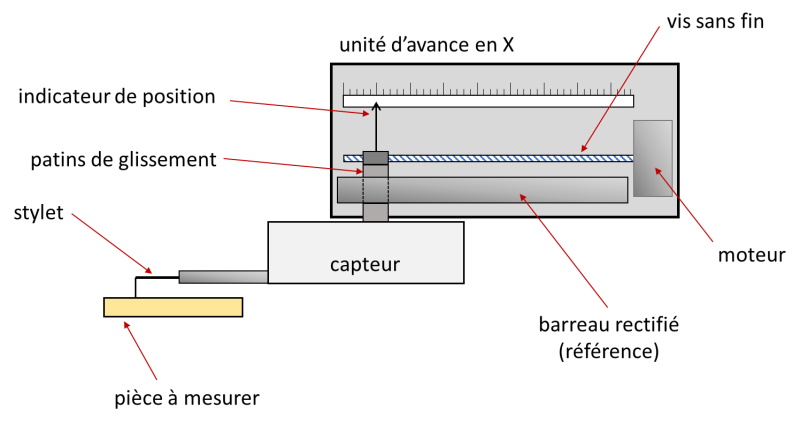 The stylus itself is terminated by a tip, consisting of a microscopic sphere of a few microns in radius. This sphere, often made of diamond, or a hard stone like sapphire, is attached to a conical support. The whole constitutes a conispherical tip.

By default, the tip has a radius of 2 µm, and the cone has an opening angle of 60°. But manufacturers offer many models of stylii, with various characteristics, especially regarding their length and height.

The stylus rotates around a pivot. The opposite end of the stylus is connected to a transducer device, responsible for converting the vertical movement of the tip, into an electrical signal.

There are different transducer technologies.

Like any movement, the sensor cannot instantly reach its cruising speed. There is therefore an acceleration phase, during which the displacement is not linear, so the spacing between the points is not regular. This is called the pre-travel, which is usually suppressed by the profilometer software. But it is nevertheless necessary to take this space into account on the sample, which can sometimes be a problem with small parts.

As we mentioned above, some profilometers are equipped with a skid. The principle is to have a wide pad in contact with the surface, to serve as a reference. This pad smooths the local roughness, allowing the tip to register the differences between this smooth shape and the actual relief, thus approximating the roughness. Today many brands offer pocket profilometers, called roughness testers. The measuring part is placed directly on the workpiece to be measured. This makes it possible to measure surfaces directly on a large component, in production. 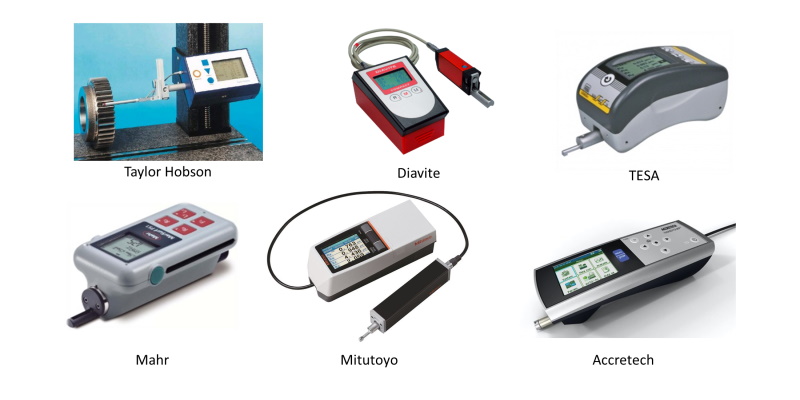 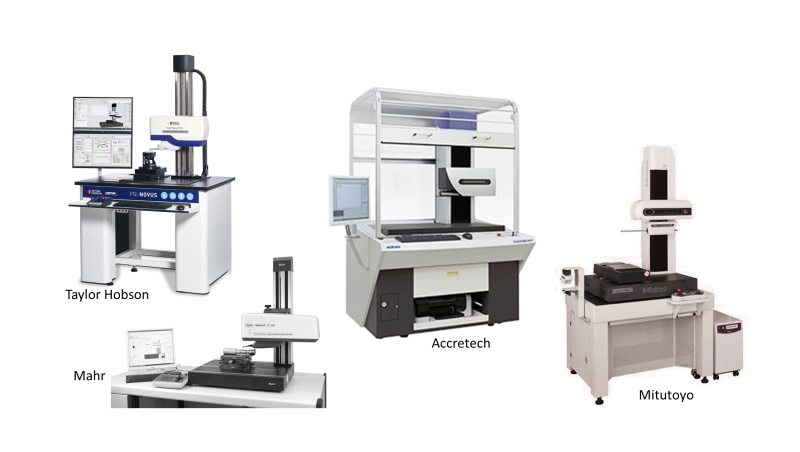 Laboratory profilometers allow more precise measurements, including not only roughness, but also waviness and form deviations. More and more profilometers do both surface texture and contour.

The high precision of these devices requires them to be isolated from environmental disturbances, mechanical and acoustic vibrations. This is why some models are mounted on active damping tables, and are protected by closed enclosures.

Some profilometers are specialized in measuring microelectronic components, even silicon wafers. These very fragile surfaces require an extremely low force of contact, thanks to dynamically controlled force.

Models intended for microelectronic component production lines, in a clean room, can receive closed cassettes that contain several wafers, which are loaded and unloaded in the profilometer automatically.

Advantages and drawbacks of stylus profilometers

All these advantages mean that the contact profilometer is still today the most widespread measuring instrument, for the analysis of surface texture.

However, it is also important to be aware of the disadvantages and limitations of the technology.